The Compilation of Spitzer-observed Near-Earth Objects.

The SpitzerNEOs project has been completed. All observations have been obtained, reduced, and modeled. This is the final state of the data set. While this website and the underlying database are still being maintained, a static backup of all the data is available in this repository.

Near Earth Objects (NEOs) are small Solar System bodies whose orbits bring them close to the Earth's orbit. NEOs lie at the intersection of Solar System evolution science, space exploration, and civil defense. They are compositional and dynamical tracers from elsewhere in the Solar System; the study of NEOs allows us to probe environmental conditions throughout the Solar System and the history of our planetary system, and provides a template for analyzing the evolution of planetary disks around other stars. NEOs are the parent bodies of meteorites, one of our key sources of detailed knowledge about the Solar System's development, and NEO studies are the essential context for this work. The space exploration of NEOs is primarily carried out through robotic spacecraft (NEAR, Hayabusa, Chang'e 2, Hayabusa-2, OSIRIS-REx). Energetically, some NEOs are easier to reach with spacecraft than the Earth's moon, and NEOs offer countless targets with a range of physical properties and histories. Finally, NEOs are a civil defense matter: the impact threat from NEOs is real, as demonstrated in Chelyabinsk, Russia, in February, 2013. Understanding the number and properties of NEOs affects our planning strategies, international cooperation, and overall risk assessment.

NEOs typically have daytime temperatures around 250 K. Hence, their thermal emission at 4.5 μm is almost always significantly larger than their reflected light. We can therefore employ a thermal model to derive NEO diameters and albedos. This makes the Spitzer Space Telescope the most powerful NEO characterization telescope ever built, reaching 3σ sensitivities of ~1.5 μJy in 10,000 seconds, and able to observe thousands of NEOs. 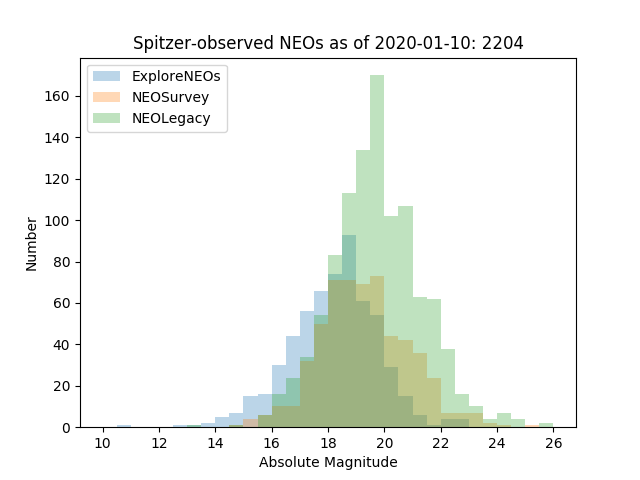 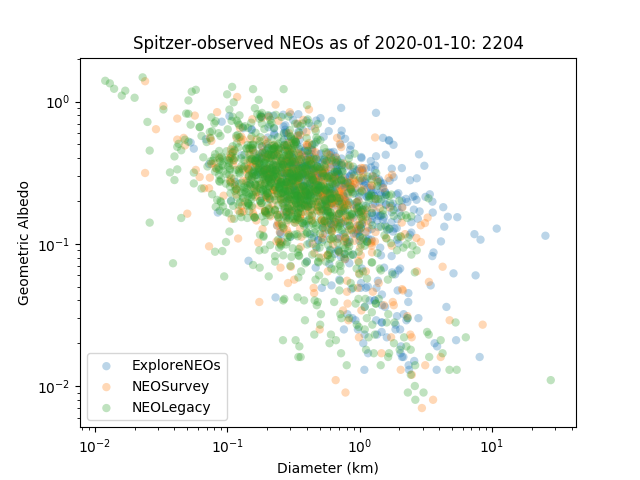 This website compiles Spitzer IRAC observations of Near-Earth Objects from three large-scale surveys in one database. Reduced data products are available in the form of flux measurements, as well as thermal modeling results in the form of diameter and albedo estimates. Explore the latest results:

Please note that all diameters and albedos presented here have been derived with the methodology presented by Trilling et al. (2016).

The Spitzer NEOs database contains a compilation flux measurements and derived NEO parameters from the following programs carried out during the Spitzer Warm mission.

NEOSurvey (Program ID 11002) is a Spitzer Cycle 11 Exploration Science program which was carried out between 2015 February to 2016 September. It was composed of a total of 570 AORs and obtained observations in the 4.5 μm band. All observations and modeling are complete and in the database. The project is described in Trilling et al. 2016.

NEOLegacy (Program ID 13006) is a Spitzer Cycle 13 Frontier Legacy Science program which was begun in 2016 October and is still executing. As of 2018 March, a total of 714 AORs have executed and are in the database. IRAC photometry is obtained at 4.5 μm. Observations are scheduled through 2018 September.

A list of publications by the SpitzerNEOs team members based on these observations.